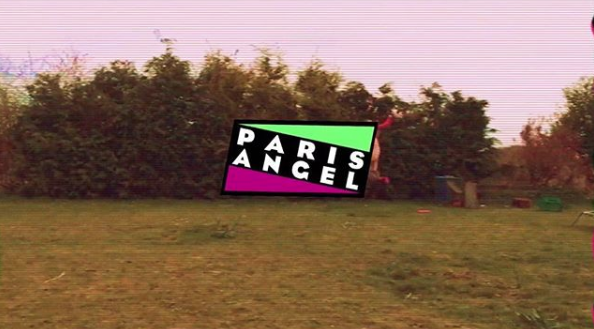 In my early teens, I was mostly into climbing shit, stealing my dad’s fags and being a proper nuisance. I’d often burn things for my own amusement and enjoy watching how therapeutically plastic melts. I was a weirdo, but wit was a laugh. Nowadays though, it’s all a little different for youngsters, especially in the case of Louis Bradder, a 14-year-old designer from Petersfield (a small town just north of Portsmouth) who is the face behind Paris Angel, an exciting brand you should probably know about.

In today’s mad-congested streetwear market, creating tees with standout, cool graphics isn’t easy, which makes this whole thing even more impressive. To find out more about it, we caught up with Louis to discuss why he’s not burning and climbing shit, where his passion for design comes from and how he found himself making really, really good tees…

Before we jump straight into fashion-clothes-chat, tell us about you, the person behind the brand…

OK – I’m Louis, I’m 14 and a skateboarder from Portsmouth. On a day-to-day basis, you’ll find me working on the brand designs and spending the rest of my time skating or researching old styles of clothing and the people behind them as most of the good stuff was before my time.

Tell us a little about the brand Paris Angel…

To be honest, I never really intended to start a clothing brand and it wasn’t planned, but it’s always been pretty appealing to me. Most probably because of older brands like Gimme 5 and X-large, and how there seems to be a lack of similar brands nowadays. Paris Angel pretty much started as an outlet for my designs and then eventually developed into a clothing brand.

Where did the brand and the name come from?

The Idea for Paris Angel came about when I was learning Illustrator and making various logos in my bedroom. I’d never really make them for anything in particular, I just liked making them. I would always try to think of a name to put them under and then somebody mentioned the old Manchester band Paris Angels. I loved the sound of it, so that became the name I started to use. Eventually I decided to put the designs onto tees.

How did you initially get into design?

My old step dad was a designer and I’ve probably wanted to design since I was like five years old, I just wanted to do something similar to what he was doing at the time. I used to make pretend t-shirt brands with him and my sister when I was about eight or something, just messing about, so it’s always been around. I also had thousands of football boot drawings under my bed that I drew when I was younger, if that explains anything…

Where do you think your passion came from?

It comes from being surrounded by it and growing up with it from a very young age. It was all I ever really knew for a while. I just continued and started studying it as I got older and began to then understand the different looks and styles in clothing and design.

Who and what has inspired you?

Vernon Courtlandt Johnson, Olmes Carretti and Ben Drury are all massive inspirations to me as they have all largely influenced design and clothing in one way or another. None of my stuff come from any of them directly, but I can’t say that I haven’t been influenced by them. Similarly with Spike Lee and Kraftwerk, except for the field that they worked in.

Brands like Palace, Alltimers, FC Real Bristol, Hockey, Bronze 56K and Best Company are massive inspirations too, but again I wouldn’t really say that they have obviously influenced the clothes I make, other than the high standards of graphics and quality ideas that they consistently make year after year.

What do you want to do with Paris Angel, what’s the goal?

No major goals for the brand at the moment really, I just like making tees that people enjoy and like to wear.

To get some of your own tees to enjoy and like wearing, head over to www.paris-angel.co.uk. Tell your mates, tell your dad and believe me, this is only the start.